Why should you consider Braunvieh?

Perhaps you are researching Braunvieh cattle, just as I did.  There are some excellent tabs on this page that give you some great history on the Braunvieh breed and results of their ability to perform.

I am the first to admit, I never intended to breed any cattle, let alone Braunvieh cattle.  For full details on that statement go to the “Vision from Above” tab.  However let it suffice, when the decision was made to enter the cattle business, excellence was the standard from the beginning.  The Lord led me to John and Loretta Hall through “Kairos”, a prison ministry.  In a nutshell, I asked John what breed he would raise if he were starting from scratch and he led me to Braunvieh cattle.  I started researching the Braunvieh breed, and convinced of their merit, started my herd with 6 bred cows.

However, the past years have shown me experientially what my research and John had told me earlier.  The Braunvieh are a complete breed.  They are more docile, more fertile, produce more milk and are more feed efficient than many of the hugely popular breeds of today.  In Texas, we call that easy keepin!

Temperament – There are many studies that link docile temperament to fertility.  I believe that by experience.  I also know it is more fun to work with cattle that want to work with you.  We don’t use ropes or hotshots.  Most of our cattle will eat cake out of your hand.  If one gets on the wrong side of the fence, it doesn’t mean an afternoon spent convincing her to come home.  It usually means 5 minutes and a few shakes of a sack of cake!

Fertility – This makes or breaks profitability in any cattle program.  On the Diamond H, we lutalyse our Braunvieh heifers at weaning, because it is not uncommon for contemporaries to breed at 6 months.  We breed our heifers at 12 months with very few problems.  Many of our highest performing calves are out of 10 plus year old cows.  We have several cows over 15 years old in production.      We begin using potential herd sires at 12 months on up to 12 cows.   Consider the economic impact of breeding one-year earlier and having cows in production over 10 years, or using a bull 4 or 5 years longer!  That is money in your pocket.  This breed will help you succeed as a commercial cattleman!

Milk -The Brown Swiss was bred out of the Braunvieh.  The Braunvieh breed produces lots of milk, which naturally increases weaning weights.

Feed efficiency –  When we put our bulls on test, it is not unusual to have 4 pounds average gain with 5 pounds conversion.  Additionally, Braunvieh cattle typically grade higher on the rail with less days on feed, than the popular black breed of today. In an environment of $8 corn, that is important!  We are using a test facility  in Navasota Texas to test all potential herd sires for feed efficiency using a system called Grow Safe.  It is a long explanation which you can read about at this link  RFI explanation.  In a nutshell, the system tracks the EXACT amount of feed the animal consumes for a 70 day period.  That is compared with ADG and put in a formula and out pops a number called RFI (residual feed intake).  What it tells you is how efficient that animal is compared to others in the test.  THAT is information you want to know.  In addition, efficiency is a highly inheritable trait.  BOTTOM LINE FOR THE COMMERCIAL PRODUCER.  IF YOU WANT TO MAKE MORE MONEY, USE EFFICIENT BULLS.  You can put more efficient animals per acre.  You will have lower feed costs in the feedlot.  If you want to make money, you can’t ignore this.  For more information on the GDC and efficiency testing, go to this link.  Genetic Development Center

Carcass Traits-  In the feeding business there is a antagonism between finishing and yield grades.  The final days on feed needed to get the black breed to marble and grade, they put on lots of back fat which lowers yield grades.  The Braunvieh breed marbles naturally which allows them to finish on less days of feed, increasing your bottom line.  The do so while maintaining a low level of back fat.  Higher yield grades means more profit as well.  THAT is why the Braunvieh logo is “Braunvieh, When Profit Matters”.   I don’t know about you, but I don’t JUST do this because I think it is fun (even though it is) 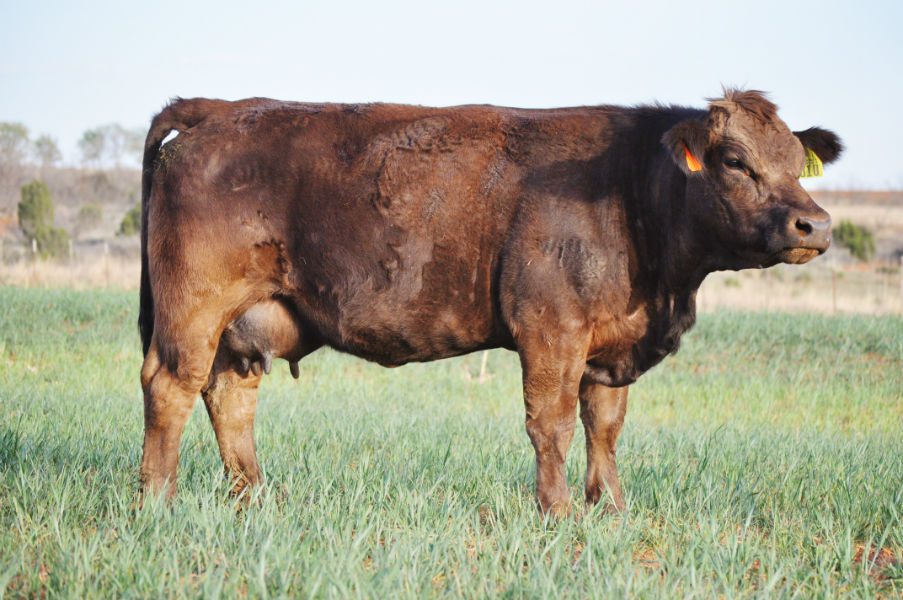 U10 typifies what we are working to raise. Moderate efficient, high milking cattle in a black, polled package.

We were recently featured in two different  segments on American Rancher TV show. Click HERE to watch the show concerning the strength of the Braunvieh female and Click HERE to see why a breeder should consider Braunvieh bulls on YouTube.  You will find these videos good and very informative

There is not a cattle breed that does not say, “our breed will solve all your problems” .  I can tell you why I picked Braunvieh, but the reason any one should raise a particular breed is up to them and what is right for their program.  For most of us, in the end, it must be profitable, and that is why I think Braunvieh make sense.  There are several links on the Braunvieh website, I recommend you read.

Why Braunvieh is a good answer to the age old question, “what cross is a Braunvieh….. Brahma and what?

What can brown do for you?  http://www.braunvieh.org/brown.html describes what makes Braunvieh excel and documents some results.   These are good resources to understand the breed.  There is also a brochure on that page that is a great summary of the question, why Braunvieh? 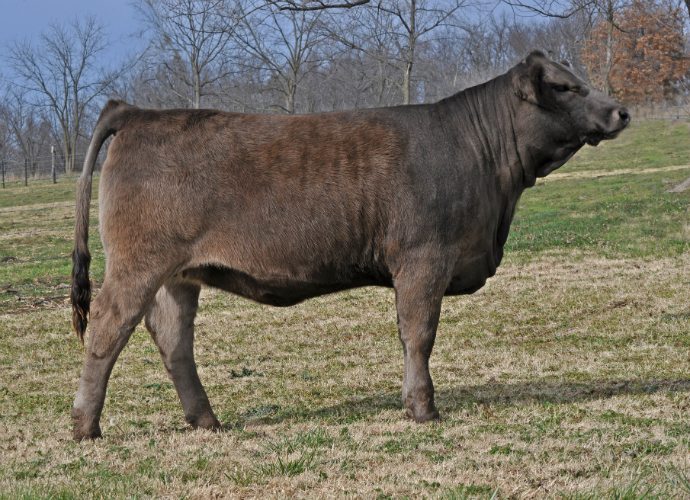 This Ranger11r daughter is stylish, but she made one great cow!