Clearly, Heifers are a popular item, this is the number two hit page on our website.  The young cow will give you many years of production,  but heifers are among the highest risk in our business.  IF she does calve without problems/or assistance, will she be a good mom, raise a good calf, and MOST IMPORTANTLY bred back as a “sophomore” heifer?  I don’t know the number, but I have heard that 25% of replacement heifers do not make it to be a 3rd calf

Take a look at the Braunvieh bulls that we use on heifers.  They are some good rips and are proven low BW bulls!  We are blessed to have them standing for us in the pasture.  These bulls are the kind that allow the first calf heifer to put a live calf on the ground and it is not a “throwaway” or “pass” calf.  You will get an animal that can most likely move your program in the direction you are hoping for! 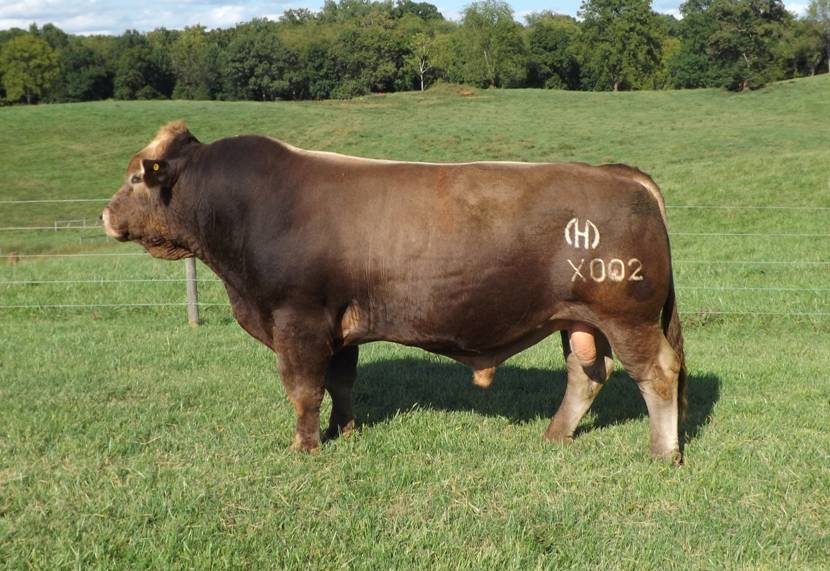 Not a small part of the value of these heifers is the bull to whom they are bred.  Most all are cleaned up by Xerox.  As you can see, he is very phenotypically correct, additionally, he makes em very clean fronted.  His daughters have topped the price in LOTS of Braunvieh auctions.  He is moderate in frame, and one of the top reasons…he is in the top 1% in the breed in birthweight!  Now that I have tested many of his son’s at a performance test…I have formed the opinion: he is not only a low BW bull, he is also a performance bull.   He’s good…he makes ’em good!  For more information, check out this link (herd sires) 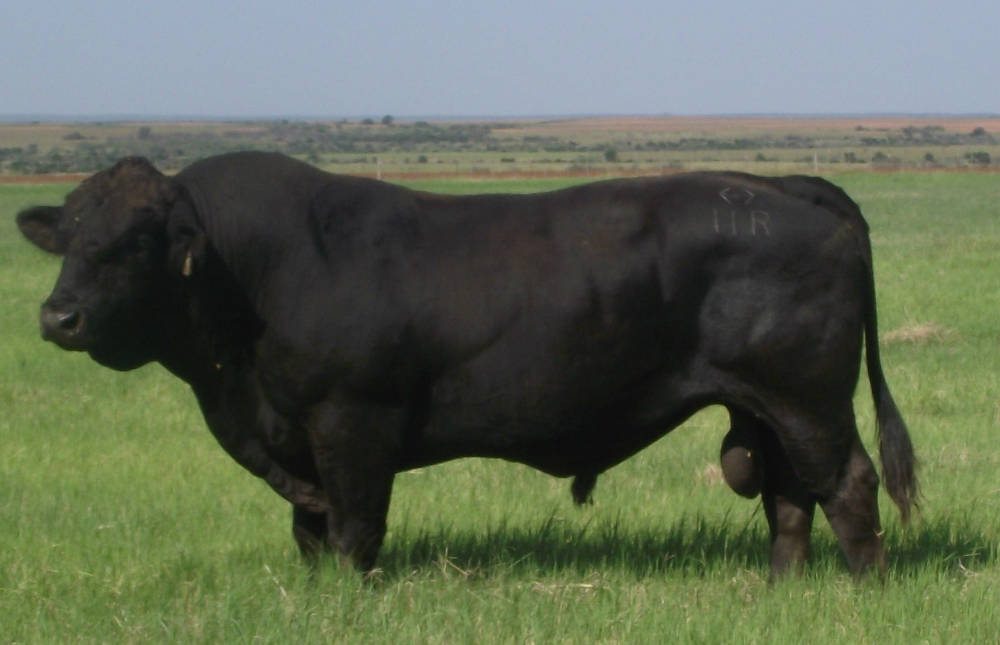 Well, Yes…I AM a Ranger 11R fan.   I am a fan because he was a special bull.  Now, I realize there are those that don’t hold my viewpoint, but I hold results in high regard, and the performance of his genetics (via sons and daughters), are well documented.  You can read more about him at this link…herd sires.  Many of these heifers are AI bred to Ranger 11R conventional or female semen.  The female semen quantity is very limited….I consider this a very valuable breeding.  His females are moderate, have excellent udders, and consistently wean calves of 50% or above of their own body weight.  Of course, the female calves tend to lower birthweight even more.  If the AI sticks, you will get a good result, one that I believe will move your program forward. 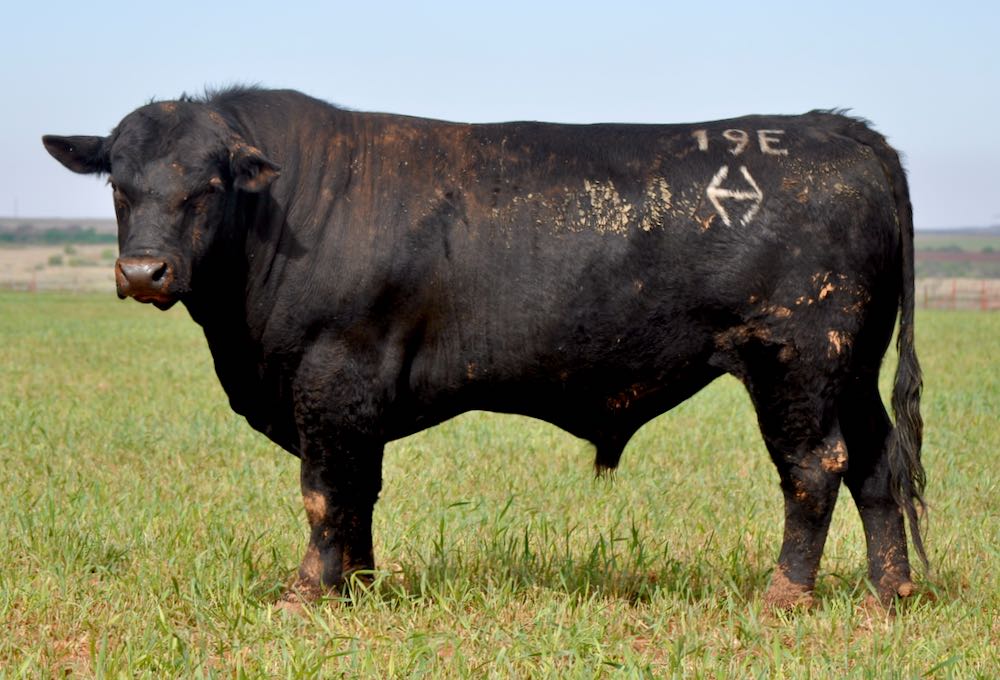 Well, 19E “Mack”  (just under 2 1/2 years in this picture) needs a bath and though this ain’t a great picture but I think it will give you an idea.  He had great performance, check out the details on this link

Our newest heifer bull is Kenworth 19E.  He surfaced in the testing of our Fall 17 bull calves.  His own BW is 68, His dam has had him and a 64# calf that grew like a weed!  He tested well, had a strong RFI and an excellent IMF number. Weaned 631 and hit 1031 as a yearling.   He is a Y47 son, (like a lot of our good ones) out of Ranger 11R daughter.  That makes Ranger11r great grandsire on the sires side and grandsire on the dams.  Stacking good on good!  We have two calves out of 19E as I write this.  They hit the ground unassisted, both at 79#…. are very good phenotypically, angus black and are grew like a weed!  The male weaned in the 680 range and the female broke 600!   We put him on the Fall 2020 calves and on 20 something fall cows…We have a lot of confidence in the young bull, and want to get as many calves on the ground as possible. We preg checked the heifers and all were palpated bred.

We will have a total 9 or 10 confirmed fall calving bred heifers listed as soon as I can get it done.  We very seldom sell open heifers, but we have too many females….SO  we also have 34 Spring heifers with the bull as I write this.  I will sell most all of them as “exposed”, and they will be priced  $750 to $1000 less than when they are confirmed bred in mid October ( price relative to bred pricing depends on how close it is to palpation date).

There are some Jim Dandy’s in both groups.

If you have talked to me I probably said “we expect alot of our girls”, and that is the truth.  These heifers were put with the bull for 45 days, two breeding cycles, and most were called long bred, on 4/30, meaning they bred on their first cycle.  What that means to you, is that they are front pasture, fertile doers.  That is the type and kind most folks are lookin for.  This bunch is a consistently great group of girls…females that will do the job you ask for years to come.  There are 4 in this group that if I had the room, I would keep…ALL of them are good enough to make the cut on our standards!!  But, I can’t keep them all so, I intend to keep one of them…I’ll let you, the customer decide for me.  I’ll keep whichever is the leftover…I think they are all that good!  If you come see them, I’m willing to bet….. you will agree with me, “them’s some nice ‘uns!” 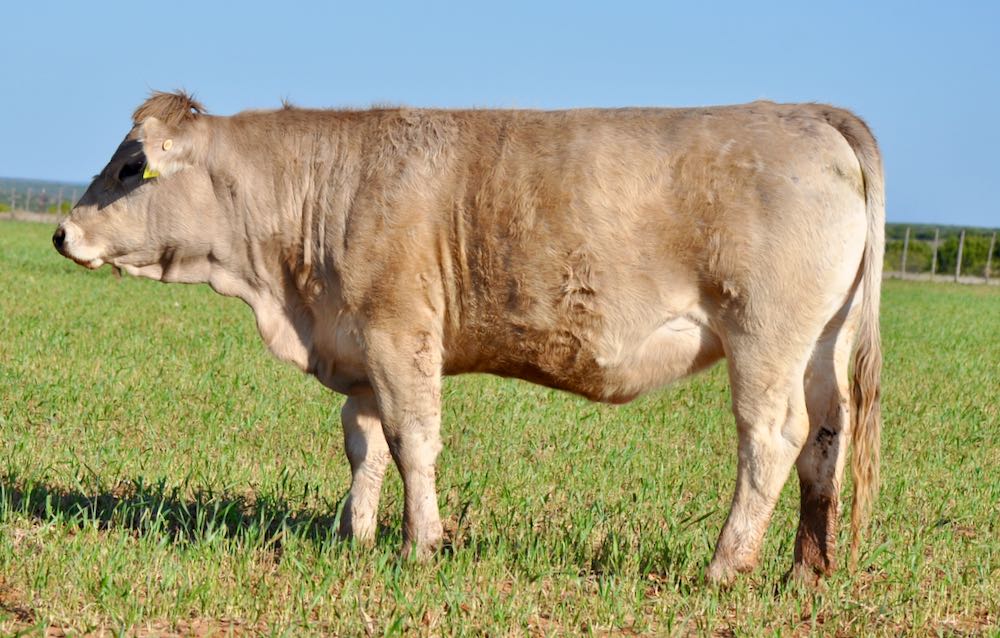 This is one of those pictures that is on the border of “maybe I shouldn’t post it’, and “well it’s ok but not great”.  Though the picture doesn’t show it well, she has good volume and is very deep flanked.  Her dam was a very nice fullblood 3W daughter that died in a mudbog while the herd was in Weatherford (there was very little positive about my Weatherford experience!).  F20 was her heifer calf….clearly 98C was gonna be a great cow.  Truth is I’m most likely making a mistake selling this one.  These genetics can not be reproduced, but for us, the color thing is important and this girl does not meet the AAA (angus assn) seal of approval!  This girl had a great BW to WW spread.  This purebred beauty is bred to our 19E “Mack” bull and was palpated 5 to 6 months on 4/30. 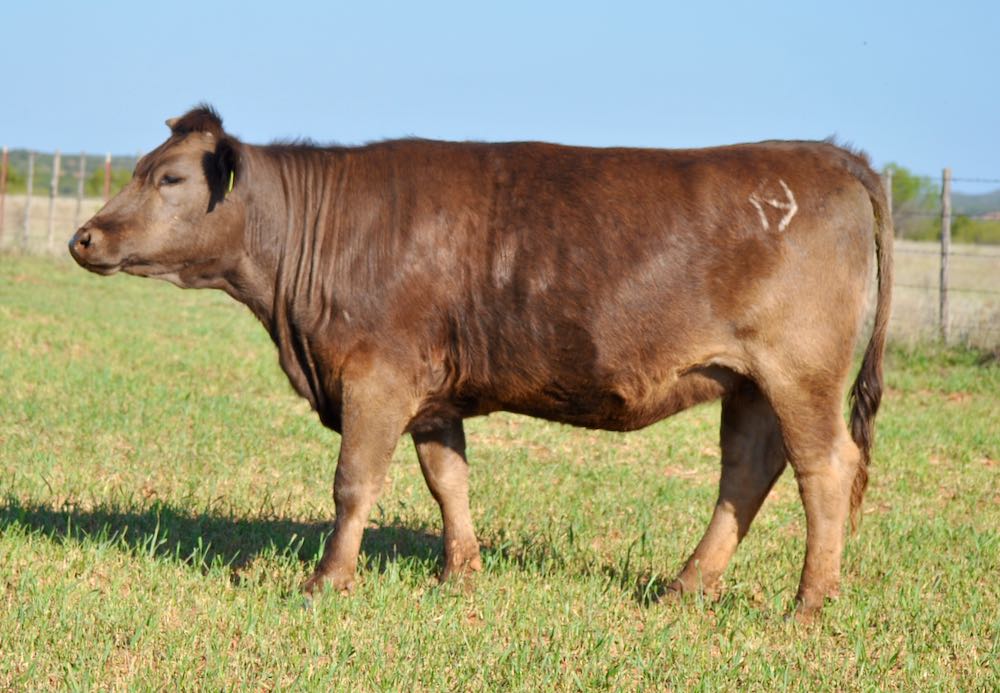 I’ve been doing this long enough I like to think I can separate “the sheep and the goats” (as the Bible says), certainly by weaning time….boy did I miss this gal in a MAJOR way.  She is the first calf of an ET female sired by Dado.  The cow side of the flush was raised by Mark Nelson, owned by Stoney Sheer, and I think she’s a SOLID female!   This calf was the first DO6 calf we had on the ranch.  D06 is a halfblood who is for sale click here to see D06 details).  Even though he was a half blood, his performance test results were so outstanding, we wanted to put his genetics in our gene pool. She certainly had all the goodies to make a great one.   This girl had an extraordinarily low BW and not long after, she and her mother were moved to Weatherford, Tx, for 5 months.  That proved to be a VERY bad move and the cows suffered.  When we weaned this girl (days after returning home), she was poor and my eyes saw no reason to make a producer out of her.  So we turned her out, the most likely outcome…to the feedyard for her.  WELL….all this poor girl needed was some decent groceries to do her job, and boy did she get it done!!  Honestly, I can’t tell you my surprise as to how this girl took off!  She was way behind at weaning, but let me tell ya, she has turned into a good, and I mean GOOD female!  She just keeps getting better and I think she may end up being one of the top cows in her contemporary group even the numbers won’t show it.  This 3/4 blood is palpated bred to 19E….you’ll get a real solid dose of heterosis on this one! 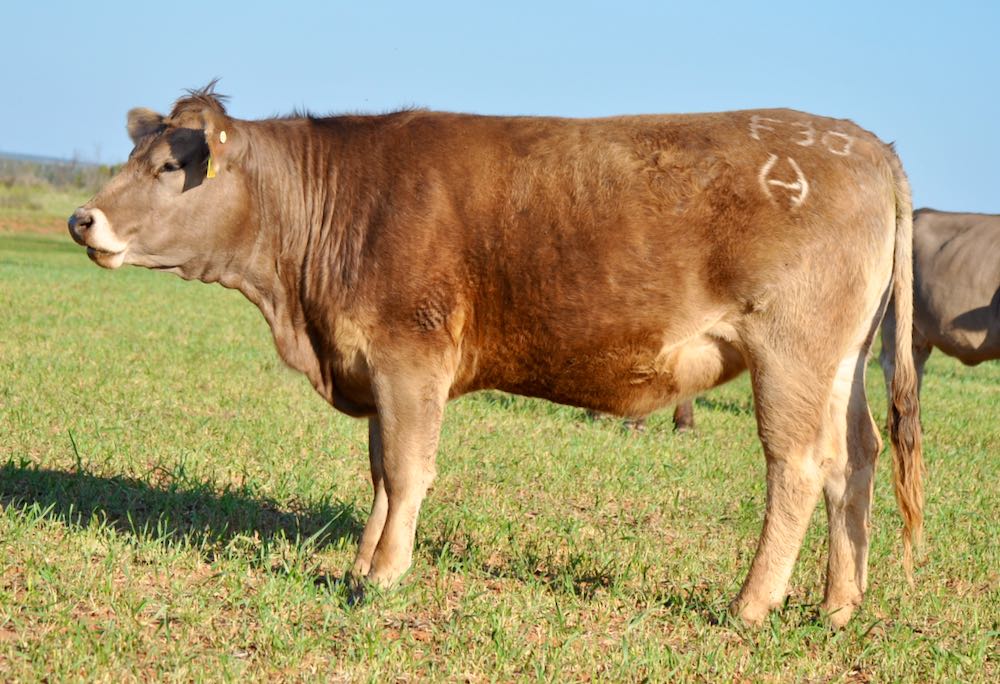 Well, you can pretty much read the story above and you know the story of this female as well.  Same low birthweight, same sire, and out of a VERY good cow.  The female side of this heifers pedigree is Ranger11r and a very powerful cow I sold 3 years back (one of those  you wish you could rethink what you did).  Both dams of F26 and F30 were second calf heifers, an age that requires the highest plane of nutrition of a female cows life….and they both got just the opposite!  She came home got on good groceries and took off.  She is a dandy, just like her contemporary F26.  I’m telling you, ya just can’t believe how they bloomed when they got home!  And I forgot to mention, their dams, after coming home in a body score of a (low) four, both rebred…..astounding!  She too, is palpated bred to our 19E bull.  These girls are gonna do really well! 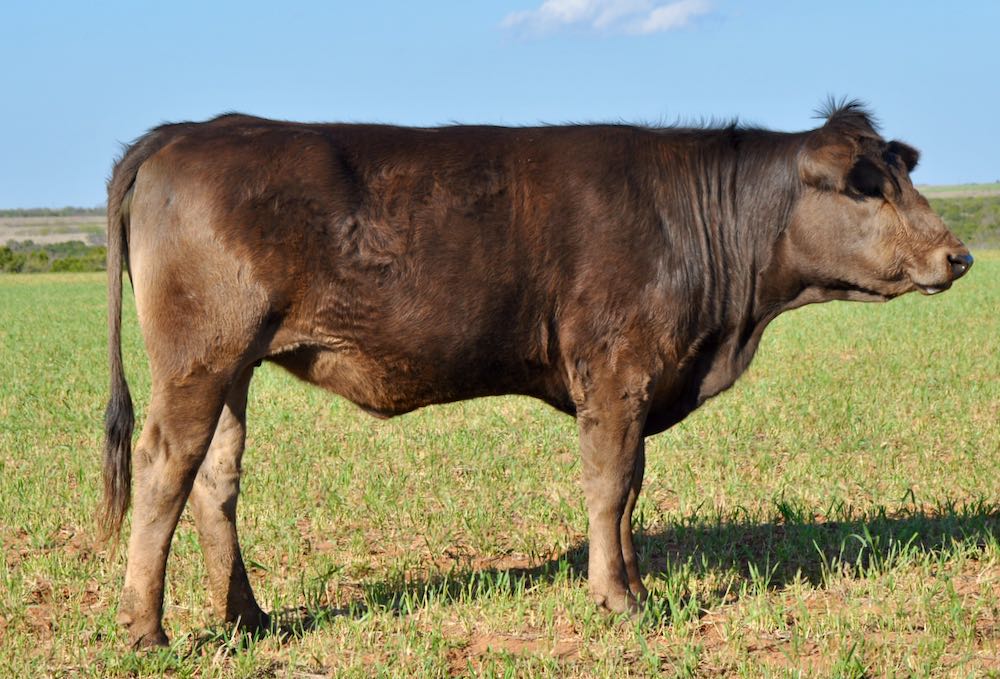 I’m gonna sound like a broken record, but not so hot of a picture….solid heifer.  If you come look, you can see for yourself.  This heifer is sired by our Xerox bull, out of a James daugher to a double bred Ranger11r cow. This girl  has the genetic package to be great…..just needs a good home and she will do a terrific job….without doubt.  She is palpated bred to our 19E bull, which should result in an Angus Black calf. 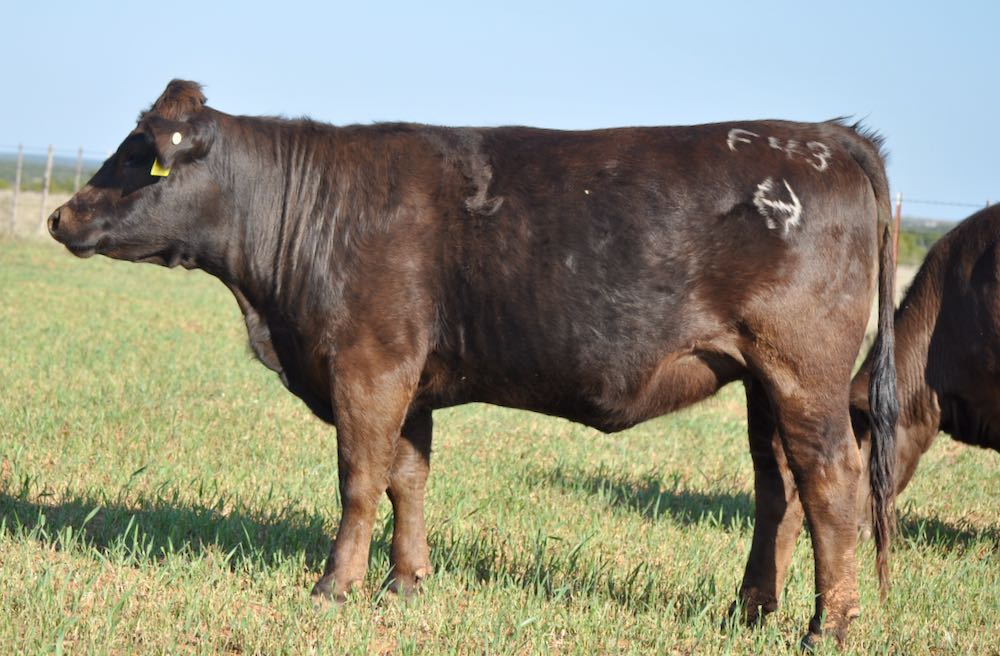 This is what I call a “top shelf” heifer….they just don’t get much better.  Her dam is 89A, a cow we will flush next year cuz she makes em like this….every year!  She had had 4 calves with an average ratio of 103.  We have kept all her daughters, and this one is a keeper for sure!  Honestly, I don’t want to sell her, but the choices are difficult.  So I am going to offer her at a price that reflects her value, and if someone wants the best we can offer, she is theirs.  She is palpated bred….was AI bred to Xerox and pasture exposed to 19E.  She is homozygous black…..I’m telling you, she is deep, lots of volume and has a very powerful rear end.  This one is a future donor prospect if I have ever seen one. 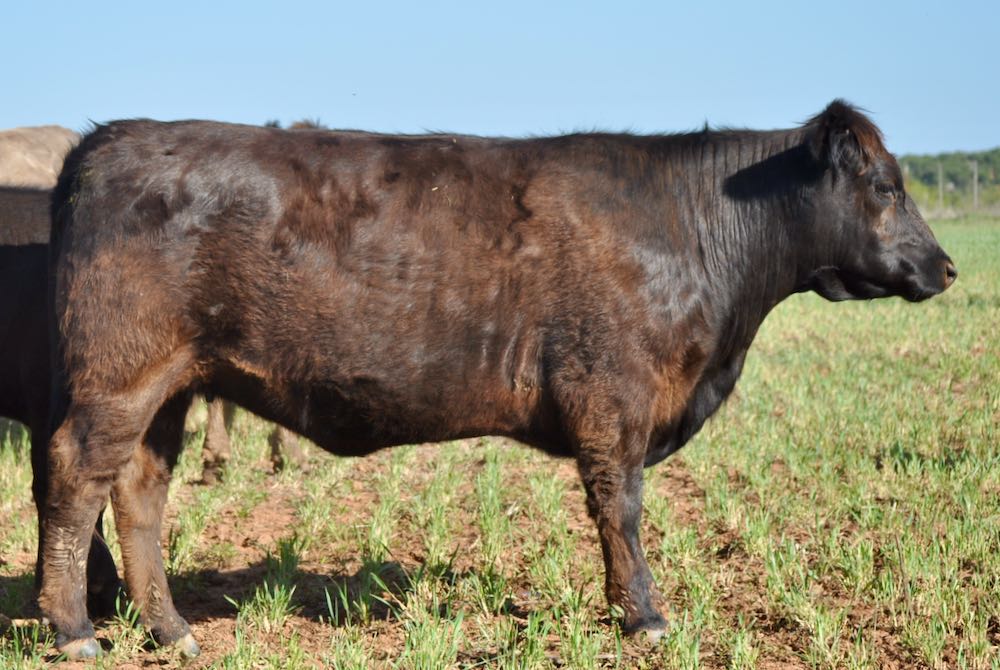 IF you are long sighted in this business…realize that greatness is a process….this is the female for you!  This 1/2 blood is out of an Angus cow that has reached superstar status in her time on the ranch…In fact both Stoney and myself flushed her, due to her 6 year calving history!  I kept her heifer from the year before….she calved a Xerox heifer that hit 700#…not bad for a first calf heifer!  I would keep this one too, but a purebred guy just needs so many half bloods…  She is a 3W daughter….deep in flank, lots of volume, and top and rear flank…shes got it all, in a black polled package.  To add even MORE value, she is AI bred to Ranger11R and pasture exposed to 19E.  Vet called her long bred….IF she is bred to the AI…THAT will be some kind of calf….I feel sure!  This one is a pick for sure!

Heifers, are without doubt much like their human counterpart…..middle school aged girls.  I can hearing them saying..”is this my good side?” or “does my hair look OK?”  All I know, they are a PAIN to take pictures of. This is an usual pose…  It is very time consuming to get the job done well.

See also our Bulls for Sale | Cows/Pairs for Sale 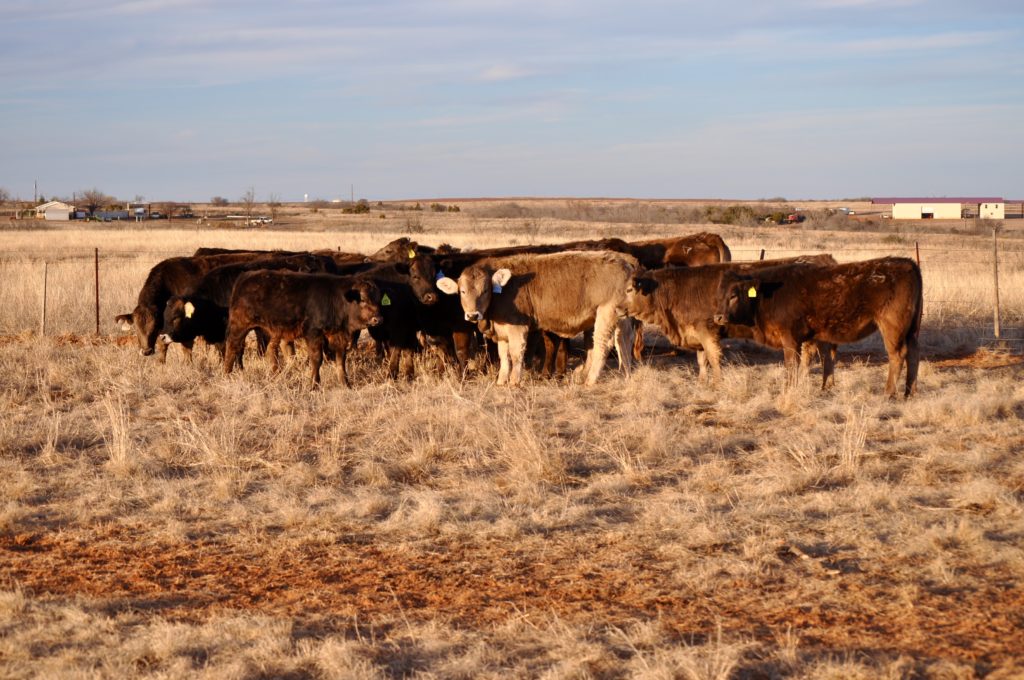