This vacationing could grow on me~or~do I really want to go back to work? 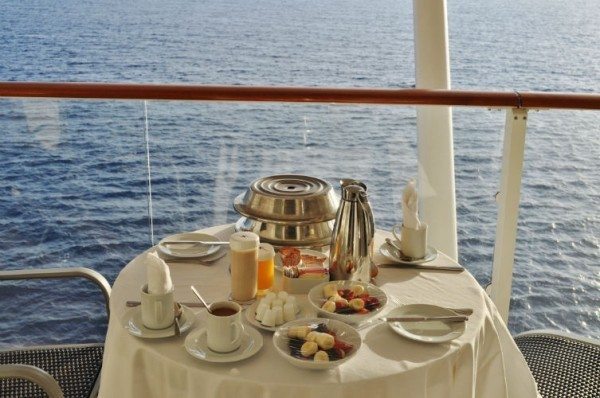 The Silliouete is the newest ship in the Celebrity fleet.  It’s only two years old…..  Very nice.  There are nearly 4200 passengers and 1300 crew.  Karra and I thought the ship must be nearly empty.  We are told it is full.  Never a line, never crowded.  So far the days have been pretty much the same.  Coffee on the veranda in the morning.  Then workout, with some sort of spa treatment in the next few hours.  Did I mention, I couldn’t get used to this?  I mean really……you would become pretty useless if this was your life!  Then we hang out in the room.  I’m working on the website for the ranch and Karra just doddles around.  Then to dinner and a show or show and then dinner.  Finally,  off for a great nights sleep and we start the grind the next morning with Sebastian bringing coffee for the veranda.

The Captain is Greek, I expect him to warm up to my beautiful bride…..but Karra? I guess she must have a thing for powerful, good looking Greek men!

Which brings me to the real subject of this blog…..Sebastian.  Our butler is a delightful man from Goa (near Mumbai) India.  He is single.  He was very close to his mother whom died in 2009, when he started working for Celebrity to get away from the memories.  We shared the fact that this was our first vacation alone in nearly three decades, and he went to work.  I will tell you he has painted himself into a corner.  Here we are, only 3 days into the cruise and last night he managed to get us seated at the captain’s table.   Apparently, it’s a pretty big deal, only happens once every cruise.  Karra sat next to him, whilst I sat in between Karra and a movie producer going to Austria to film for 4 months (some series for ABC).  It was fun to hear about a young Greek  who dreamed of being the captain of a ship when he was a young boy.  He became the youngest captain ever for Celebrity Lines, only to have his record broken by his little brother. 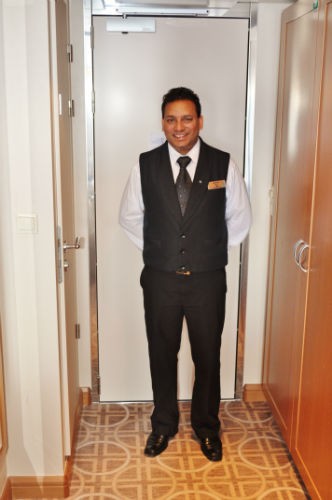 We have the best butler on the ship. We love our new friend Sebastian!

But this story is not about Dimitris, it is about Sebastian.  You see, we asked God to orchestrate our trip and I believe Sebastian is the perfect guy for us.  Remember I mentioned that Sebastian had painted himself into a corner?  Sure the dinner was cool.  I mean, I’m just an Aggie that lives on a ranch in Childress, Texas and dinner with the Captain of the ship?  But the coup de gras was when we returned to the room.  The do not disturb sign was on the door.  And coincidentally, the electronic key did not work.  We were very puzzled, and then, as the door opened, we discovered we had taken on a new roommate! 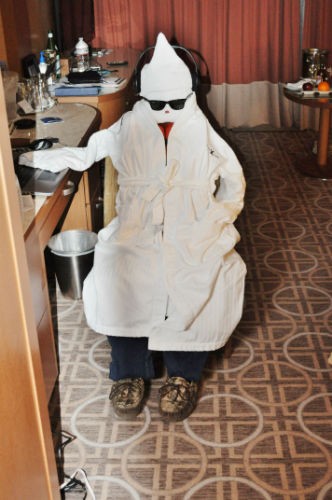 When we arrived after dinner, the do not disturb sign was on the door. We opened the door to find our shy friend …wearing my house shoes no less.  The nerve of that guy!

A perfect ending to a perfect day!

Signing off for now.  Off the ship in San Juan to to a tree top experience….zip lines and all that!